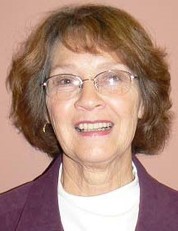 “The greatest use of life is to spend it for something that will outlast it."   ~ William James

Carol Ramsey was initiated to DKG Omega Chapter on 1 June 1977.  Her contributions to the Society for the Chapter and Pi State are many.

She served as Pi State President 1995-1997 and Chaired several State Committees, including Pi State Leadership and US Forum Representative.  She was honored with the Pi State Achievement Award in 1999 and the International Leadership Management Award in 1988.  She served as Omega Chapter President 1988-90, First and Second Vice Presidents and Chaired several Committees.
​
Carol’s contributions to education were numerous.  She was the Coordinator Title One Instructional Services and received the LCC/NYSRA Service Award, NYSCE Exemplary Educators’ Award and Service Awards from NYSRA, Lake Counties Reading Council and FLTRC.  She received a Pi State Scholarship.  She was President of Wayne County Retired Teachers and on the Board and President of Literacy Volunteers of Wayne County.
Home